Our Hero, Gil, is just 21 and coming home from uni for the last holidays before he graduates. But something's wrong - his parents don't come to meet him and their house is deserted, with mail piling up and food going off in the fridge. And then he discovers that his father is a professional hero for the fantastical country of Varay, his mother is a native of said land, and they've both gone to deal with a threat and not come back. Now all the war games, survival training, and what-not that his father has put Gil through all his life start to make sense. Obviously, the rest of the book involves Gil going to Varay, looking for his parents, and dealing with the problem they went after.

It has the boy finding his parents missing, the correct cover, and the portal in the house (in the basement). And indeed, he is heir to royalty (grandson of the King). 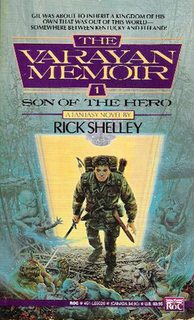